A few weeks ago, I was stressing out about so many things – work, quilt projects, household tasks, kid things. I decided that I needed a creative reboot and find a project that involved little to no planning, no stress….just free playing around.

I have been inspired by Luci Summers’ “Quilt Improv: Incredible Quilts from Everyday Inspirations” and Sherri Lynn Wood’s “The Improv Handwork for Modern Quilters”  for a while. I thought an improv project would meet my goal. I have to say, I loved every minute of this project.

I added some limits:

This first week I just wanted to start really simple, so I did some strip piecing by cutting irregularly strips (no ruler used) and placing them in a bag. I pulled out a piece and stitched them to another and continued until the bag was empty. I continued with this method “brown bag method” until I landed up with this strip. I did trim with a ruler once all sewn together.

My love for the strip piecing continued, but this piece was inspired by the rail fence block. I played with the vertical and horizontal placement. I was slightly short on a couple of blocks, so I used the black/white stripe fabric as a filler. The saved the off-cuts from the block sections, thinking I could use them as filler pieces later on. 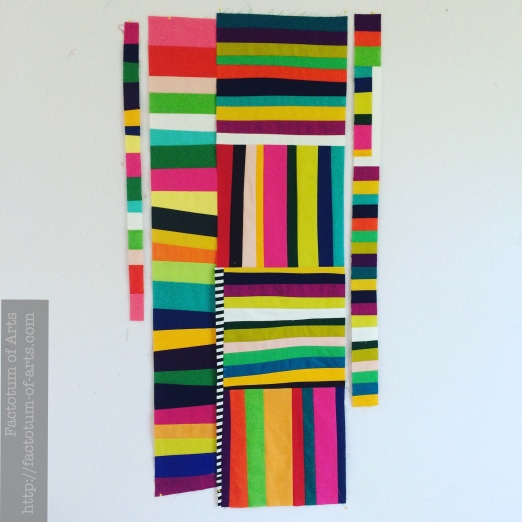 I have mentioned previously how much I love Tapa cloths, I actually have 4 in my room. One of the designs is this diamond/double triangle, which inspired this addition. Most of these triangles were cut out of a 5″ charm pack that was in my scrap bin. I then played with the border and realized that I had some colored pieces that were not big enough to do both sides….this lead to the mixed borders around the triangles.

This addition is one of my favorites, and may lead to a new quilt design.

Black and White solids were called for this week. It was Mother’s Day weekend. I was feeling down. I was thinking about my Mum and whether this could be her last mother’s day, and then feeling the additional guilt for not having her quilt finished yet.

Inspired by Frank Stella’s art work, I decided to play with curves this week. I had so much fun creating the orange peel – like block. I wasn’t done with improv curves though, and added a second block, inspired from my tapa cloths.  After adding these two blocks, I realized that the column layout didn’t work as well. I decided to change the layout some.

From week 3, I had a lot of left over triangles. In order to not have additional scraps, I stitched them blindly together (brown bag method) to make HSR (Half Square Rectangles).

There have been several quilts lately, that inspired me to make these stripe 45 degree angled blocks. This addition is my favorite part of the quilt. I love how they fit horizontally across the bottom, complementing the columnar piecing from the previous week.

I  struggled this week. I had a couple of ideas and neither were working in this gap. One idea was another circular block but I think the color palette I used for the block made it not fit with the rest of the quilt. Don’t get me wrong, I love the block but think it needs its own quilt. 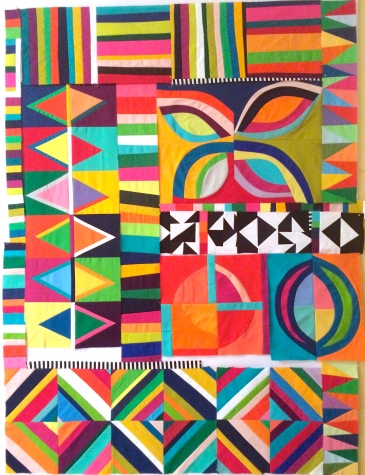 The other idea was various small log cabin blocks. Again, they did not look right. I decided to call it a day. I took the day off for my birthday this week, and gave it another go. Something made me cut up the log cabins and sew them all back together. That was it….a perfect addition to my crazy quilt. 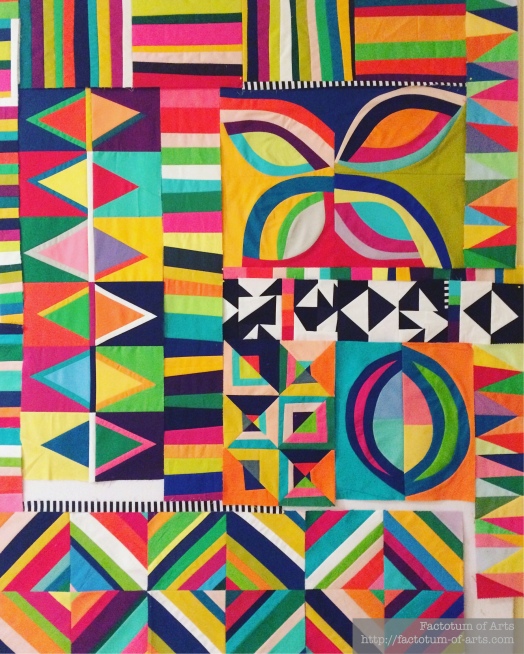 At this stage, I was feeling that the project was winding up. I pieced all the left over strip scraps and added the left column strip. Off-cuts from this, and having the old TV end of program sign stuck in my head, lead me to adding the black/white circle block (based on my phased circle block). Lastly, it was just finalizing layout and adding the filler pieces (which I also added for balance). 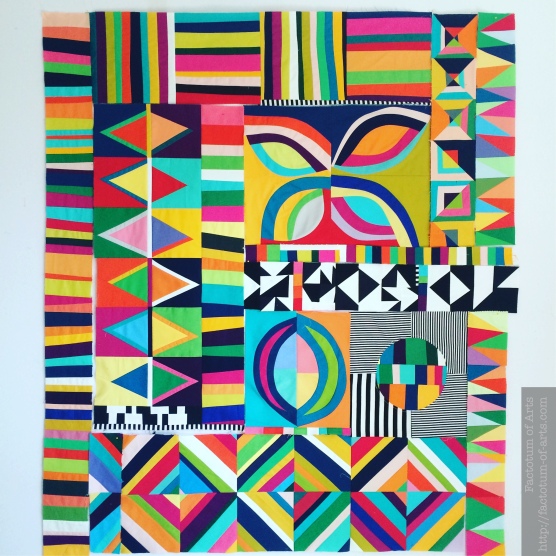 This final week, I conquered my fear of partial seams (not easy when stitching really large parts of a quilt) and stitched it all together. It’s now a finished quilt top, measuring ~ 50 x 52″. 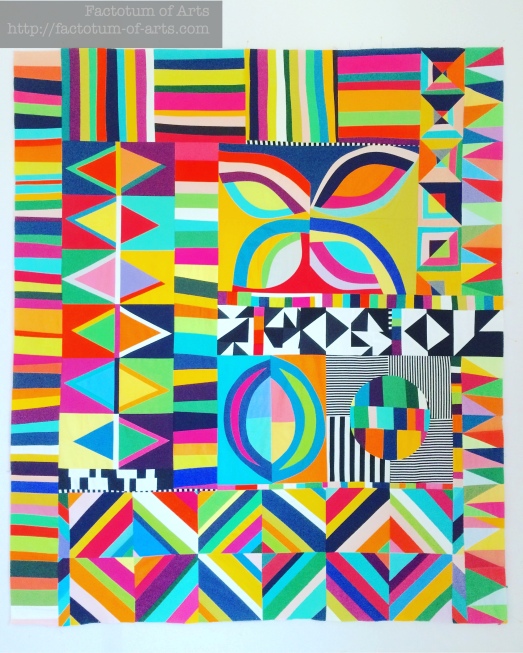 For now though, I loved this free process so much I have already started another improv project (using that circle block from week 8).

Linking up with Amanda Jean @ Crazy Mom Quilts for Finish it up Friday.

Michelle is a self-taught designer, quilter and enjoys teaching. She lives in North Carolina with her husband and son.

You may re-post or share any content, photos or designs from this blog but please credit and link back to the original content. All designs, content and photos are copyright of Michelle Wilkie unless otherwise noted.